A Call to Action: Women, Religion, Violence, and Power by Jimmy Carter 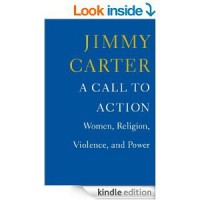 A Call to Action: Women, Religion, Violence, and Power covers some tough to read subjects such as Female Circumcision and trafficking of slaves. Many of the atrocities brought up in this book have been in the news, but not to the degree that is talked about in this book. Jimmy Carter brings focus to human trafficking, rape, prison issues, health issues, and more, in the US and other countries. He addresses all countries, all religion, all cultures. He does not "pussy foot" around any subject, and includes issues that still exist in the USA today.
Jimmy Carter, a devout Christian, looks at quotes from the bible that have been misinterpreted or "selectively" interpreted. He, also, looks at Hindu, Jewish, and Muslim interpretations. One thing I did learn, despite his strong faith and ties to the Southern Baptist Denomination, he chose to leave it due to discrimination practices he saw being practiced.
His strong faith, human rights activism, and humanitarian work have allowed him to make a strong argument for taking action against discrimination and the many traumatic activities that come out of that discrimination.

This book is a tough read, but is a MUST READ.