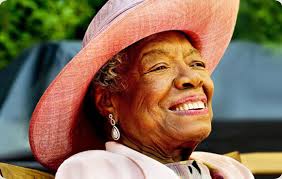 I was first introduced to Dr. Angelou's poetry in an English Class in my senior year of high school. I thought she was brilliant. It wasn't until after college that I started reading her autobiographies. I totally related to her writing. Dr. Angelou wrote from her heart, as a human being, who happened to be a woman, a teenage mother, black, an activist, a singer, an actress, and so much more. But as a human being first. She was many things wrapped up in one body, honest with who she was, and had integrity which one doesn't see frequently in this day and age. She was multifaceted, a true gem.

There are some people I know I would love to sit down with over a glass of wine, cup of tea, whatever, and just shoot the bull. Dr. Angelou was on that short list of amazing people. What would I have asked her? I'm not even sure. She had amazing presence and peace about her, even on a televised interview, and I know I would have enjoyed every moment spent learning from her.  Heaven is going to be a beautiful place knowing I will get that chance.

Dr. Angelou had many friends, and was well respected by those who knew her well and those who followed her career. She stayed active throughout her short 86 years with us on earth. I know her family and closest friends will miss her dearly.

As a fan of Dr. Angelou, my first thought in my head after hearing she had passed was I need to open a book, any book, and just read. She gave us a chance to believe in this world we live in through her actions, her faith, and in both her written and spoken word. Her legacy will continue strong.